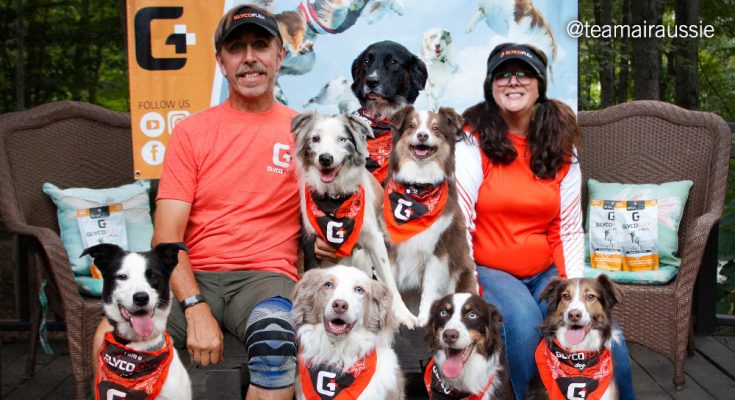 If you aren’t familiar with DockDogs, you’re missing out on the fastest growing canine sport and definitely the most exciting. With my husband, Matt and our pack of herders, we make up Team Air Aussie and we’re also proud members of Team Glycoflex, a group of DockDogs teams sponsored by VetriScience.

Making our home in Winston Salem, NC, we’ve competed in DockDogs events for nearly eight years. Team Air Aussie consists of our first dog, an Australian Shepherd named Indy, our Border Collies, Toews and Jyn Erso, and our Aussie puppy, Hossa. While our other dogs, all Aussies, enjoy swimming and jumping, they don’t love the competition so they are our team cheerleaders and number one supporters!

Matt, a Navy veteran, primarily jumps Indy, who is nine-years-old and considered a “Veteran” dog. One of the great things about DockDogs is that divisions are broken up by age to ensure fair competition. The Veteran division is eight to nine-years-old, Legend is 10- to 11-years-old and Hero is 12 years and older. Believe it or not, there are 15-year-old dogs who still love to compete!

GlycoFlex to the Rescue

You’d think that Indy may be slowing down at nine-years-old, but our little girl still has plenty of energy left in her! She consistently makes jumps of 20 to 22 feet with a personal best of 22 feet, eight inches last year at eight-years-old. I believe her success and longevity can be attributed to healthy eating, conditioning, and of course, Vetriscience’s GlycoFlex joint health supplements. Indy has been taking Glycoflex Plus daily for the last five years and now, all of our dogs start taking a Glycoflex supplement from day one!

Glycoflex Plus is a joint support supplement but it’s so much more than that. Packed with Perna cancaliculus, glucosamine, chondroitin and antioxidants, Glycoflex Plus is clinically proven to increase your dog’s hind leg strength. It also helps protect cells from free radical damage and provides the building blocks for healthy joints and cartilage.

Perna canaliculus (green-lipped mussel), the super ingredient in all Glycoflex supplements, supports healthy cartilage, the shock absorbers for joints. When it comes to dock diving, your dog needs strong and healthy joints to get that pop off the end of the dock!

Our four-year-old Border Collie, Toews, was recently diagnosed with an iliopsoas muscle strain. We immediately added MobilityFlex to his rehab regimen. After 16 weeks of laser therapy, Assisi Loop and conditioning sessions, and daily doses of GlycoFlex Plus and MobilityFlex, Toews successfully returned to competition in the Elite division of a national DockDogs event.

How to Get Involved in DockDogs

Our team competes mostly in the Southeast and Midwest in many DockDogs events throughout the year. We’ve even been lucky enough to earn invites to the DockDogs World Championships where we’ll compete later this month. In 2017, our Border Collie, Toews made finals in two divisions: Extreme Vertical Cadet, where he took third overall, and Big Air Elite, where he earned fifth place overall.

We’re also members of several affiliate clubs from North Carolina to Ohio and I sit on the board for Carolina DockDogs. Affiliate Clubs are a great way to meet people who have experience to help you and your dog learn the sport and get you on your way competing. Plus, clubs offer so much more like friendships and camaraderie that last a lifetime!

Being involved with this sport has brought many great people, experiences, and memories into our lives. No event is ever the same. You may not set a world record every time, but seeing the smile on your dog’s face makes it all worth it.

How to Train and Care for a Trail Dog: Part 1

12 Signs Your Dog is Suffering from Seasonal Allergies